Japanese candlestick patterns are a form of technical analysis, which can easily be combined by a number of other technical tools to improve the market analysis of any financial instrument.

They have been introduced to the West by Steve Nison, who is internationally considered the father of candlestick trading in the Western world. His two popular books, “Japanese Candlestick Charting Techniques“ and “Beyond Candlesticks: New Japanese Charting Techniques Revealed“ are today an invaluable reference material for any serious technical trader. These first book includes years of Steve’s experience, combined with hundreds of examples that introduce you to how to use candlestick patterns in any financial market. In his second book, “Beyond Candlesticks“, he provides examples of previously unknown candlestick patterns, shows how they relate to risk in trading and introduces new charts, such as the Renko and Kagi charts.

WHAT ARE CANDLESTICK CHARTS AND HOW TO READ THEM?

Candlesticks are the most popular way to display the price of a financial instrument. Invented by Japanese rice traders in the 17th century, their popularity rose in the West in recent decades. Whereas the „western“ bar and line charts focus primarily on the open and close price, candlestick charts truly represent the psychology and supply/demand of the markets. Their biggest advantage is in their excellent way to graphically display price-action in relation to prior candlestick bars. With their bodies, which represent the opening and closing price, the experienced trader (and beginners alike) can immediately „feel“ the market in a way best to see trading opportunities.

Candlestick charts are based on OHLC (Open-High-Low-Close) of the price. The opening and closing price are displayed as the body of the candlestick, whereas the lowest and highest price are displayed as „wicks“ on the upper and lower side. If the price closes above the opening price, the body of the candlestick will be white. If it closes below the opening price, the body will be black.

The “Hanging Man” and “Hammer” patterns are reversal patterns that consist of a single candlestick. That’s the reason why these types of patterns are also called “single candlestick patterns.” The difference between a Hammer and Hanging Man formation is on the place they form – if the formation forms during an uptrend, it’s called a “Hanging Man”, and if it forms during a downtrend, it’s a “Hammer” (i.e. “the price is hammering”).

The following chart shows a Hanging Man and Hammer pattern.

A Hanging Man (1) and Hammer (2) formation. The color of the body is not important.

As said before, the color of the candlestick is not of major importance.Although the pattern is slightly more bearish if the body is black in case of a Hanging Man, and slightly more bullish if the body is white in case of a Hammer. The chart above shows that all rules we mentioned earlier apply in our identification of a Hanging Man and Hammer pattern. The lower shadow needs to be at least twice the length of the real body, the longer it is the more power has the pattern. If the next candlestick is black after a Hanging Man, there is a high probability that the uptrend is going to end. The same applies in case of a Hammer, if the next candlestick is white or an Engulfing pattern a reversal in trend may be ahead.

These formations feature a long lower shadow and a small real body. Depending on where they form on the chart, they can be both bullish and bearish. The color of the body is not important, as far as the following rules apply:

A formation of these single candlestick patterns shows that after the price opened, the sellers had enough power to outperform the buyers and thus moving the price downward. During the session buyers regained their buying power and the price moved upward again, closing near the opening price (therefore the small body). It sends the message that an upward or downward trend lost steam and a reversal is likely to happen. I would like to ask you to open your trading platform and spot some Hanging Man and Hammer patterns to get a feeling of how they behave. You will be surprised after you see how often they form after an uptrend or downtrend finishes!

This formation reflects that after a session where buyers dominated (the white candlestick of the formation), in the second session the price opened even higher, after which sellers regained their power and outperformed the buyers. In this situation, the buyers are not as much convinced in their long position as they were before. This is a signal that the uptrend could end and reverse. If the second session’s black body of the dark cloud cover pattern would totally cover (engulf) the prior white body, a bearish engulfing pattern would form.

Some factors can add to the importance of a dark cloud cover pattern:

Similar to the dark cloud cover pattern, some factors can add to the probability of an upcoming trend reversal.

The star patterns are a group of powerful reversal patterns.

A star forms after a downtrend or uptrend, in such a way that the body of the star candlestick does not overlap the previous candlestick’s body. The price opens with a gap from the previous close price. Stars have small real bodies (or no body at all, like the doji star), and the color of the body is not important.

These patterns are a sign that the trend is about to change. In an uptrend, after the buyers were in control, the forming of a star after a long white candlestick indicates that buying power is losing steam, and sellers are keeping up with buyers. The small real body of a star signals a shift of power from buyers, to an equal distribution of power between buyers and sellers. In case of a downtrend the opposite is true. After a long black candlestick, the star gaps from the previous candlestick, and the small real body indicates that buyers are becoming strong enough to stop the price from falling further down.

Following factors would increase the likelihood of a bottom reversal after a morning and evening star pattern:

HOW TO COMBINE CANDLESTICK PATTERNS WITH INDICATORS

Just like any other technical tool, candlestick signals work the best when combined with other types of analysis for confirmation. Let’s take a look at the following example: 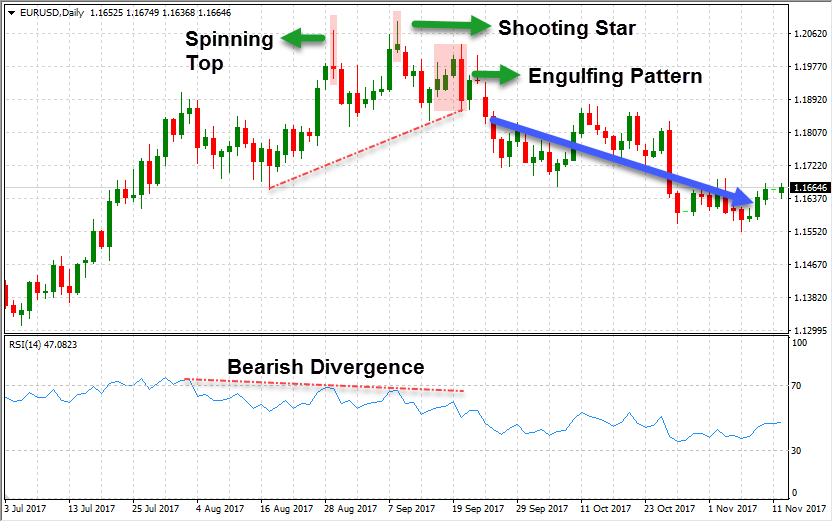 The EUR/USD pair was in an uptrend during summer this year. After forming a spinning top, which is a candlestick pattern that signals indecision, a savvy trader would begin to question the health of the underlying uptrend. After that, a shooting star forms, which is another reversal signal, and after a few days a bearish engulfing pattern forms. Combined with the fact that the price didn’t manage to form a fresh higher high, there is a high probability that the uptrend is about to change.

Take a look at the RSI indicator at the bottom of the chart. The RSI made consecutive lower highs while the uptrend was still intact. This signal confirms that a short position becomes a viable option, and indeed a new downtrend has started.

Candlestick patterns are a powerful tool that every trader should learn in the early days of his trading journey. Whereas other tools of technical analysis can give confusing signals from time to time.Candlesticks truly represent the supply and demand of a currency pair which makes them a high-probability indicator in trading. Candlestick patterns are usually grouped depending on the number of candlesticks in the pattern. Other classifications also include reversal and continuation patterns.