There are many ways to trade the markets from a swing trading standpoint. Whatever strategy you are using, it’s crucial to look for attractive reward-to-risk opportunities and to trade in the direction of the underlying trend.

Here, we’ll take a deeper look into two very powerful swing trading strategies. The first one is solely based on technical analysis, while the second strategy adds a fundamental layer to trading and can also be efficiently combined with the first strategy.

If you’re a purely technical trader, you’ll love this strategy. Trend-following works in all trading styles, be it day trading, swing trading, or position trading. As a trend follower, you should always take a trade in the direction of the underlying trend. In other words, when the trend goes upwards, we buy, and when the trend goes downwards, we sell.

For swing traders, it’s important to follow the direction of the trend, but also to enter at the best possible entry points to increase the reward-to-risk ratio. This is best done by looking for pullbacks in the opposite direction of the trend. Pullbacks, also known as market corrections, form all the time for a variety of reasons, such as profit-taking activities or contrarian trading. Whatever the reason, swing traders need to take advantage of pullbacks to increase their trading performance. 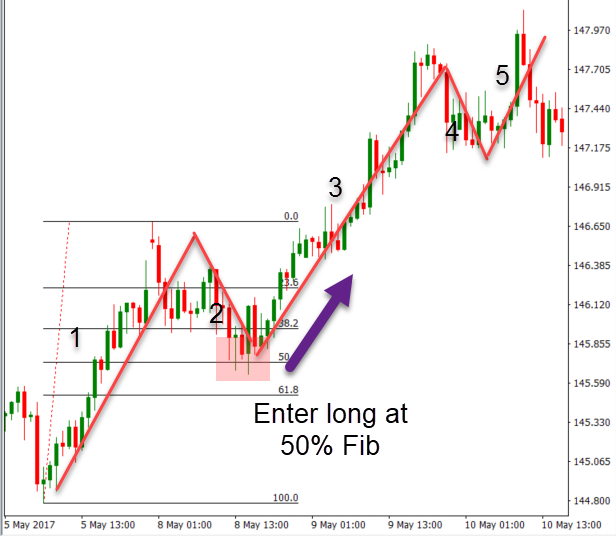 Bear in mind that strong underlying trends tend to have shallow retracements which often stop near the 38.2% Fib level. However, if the strength of the trend is normal or rather weak, we often see retracements that are deeper and stop around the 50% or 61.8% Fib level. This is especially true for Forex pairs that involve the British pound – those pairs often retrace near the 61.8% as they are more volatile than other pairs that include major currencies.

Once you identify a trade setup with this strategy (an uptrend or downtrend with a pullback near an important Fibonacci level), it’s good to wait for a confirmation, be it with candlestick patterns or chart patterns. Patterns like engulfing patterns, pinbars, or small pennants and flags that form near important Fibonacci levels, often signal a great swing trading opportunity.

Strategy 2: Trading in the direction of the central bank stance

Another swing trading strategy that we’ll introduce in this article, and that is specific for the Forex market, is to trade in the direction of the central bank stance. Now, this has many similarities with the previously mentioned trend-following strategy, as currencies tend to form strong trends on shifts in the central bank monetary policies. However, this strategy allows for a well-round analysis of the Forex market, especially when combined with the previous strategy, and also for shorter-term swing trading opportunities that last only a few days.

The basic principle behind this strategy is as follows: When a central bank is turning hawkish (that is, it provides hints on future interest rate hikes), the domestic currency is usually responding by forming an uptrend. However, the secret sauce of this strategy is not to trade the extremely volatile market periods around central bank meetings, but rather the following releases of economic indicators that confirm the central bank’s stance.

These situations re-emphasize the current central bank stance and tend to create strong movements in the underlying currency. Those moves usually take the form of impulsive moves that you can see in an uptrend or downtrend. Also, those moves usually occur after a pullback, which is why we can combine this swing trading strategy with the previously mentioned one that involves trend-following.

Here is an example of this strategy. Let’s say the Reserve Bank of Australia is thinking about hiking interest rates and discuss this change at a press conference after their monetary policy meeting. The AUD/USD pair would usually respond with a strong bullish bar, but we are not trading the actual central bank meeting.

Instead, we would wait for the next major economic report, such as inflation rates, retail sales, GDP, PMIs, or unemployment rates, and trade when the report comes in better than expected. Markets would perceive this as a confirmation that the Reserve Bank of Australia is indeed going to hike rates, and they will further increase their bullish bets on the Australian dollar. In turn, the currency will see a strong rise in value against other, weaker currencies. This is where we are opening our buying positions (preferably near the end of a pullback).

Swing trading is an extremely lucrative trading style that can return amazing profits if used the right way. Here, we have covered two very powerful strategies that swing traders can utilize to trade the markets by holding their trades open for days, or even weeks.

Swing trading is slower-paced than day trading and scalping, which is also a reason why new traders should start trading with a swing strategy first before moving towards faster-paced trading strategies.