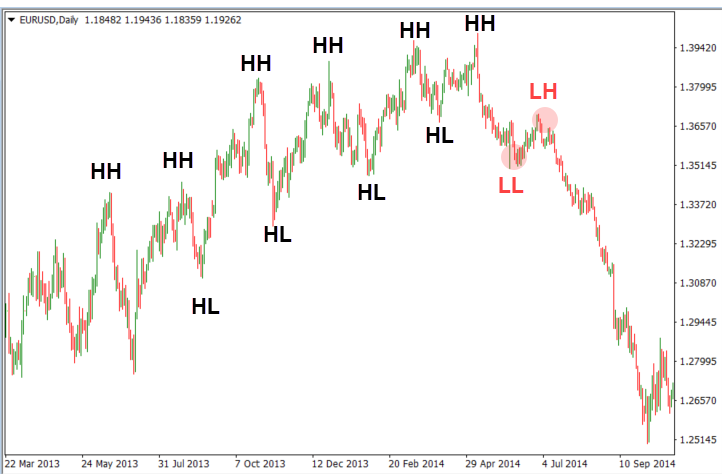 Contents hide
1 The Stages of a Forex Trend
2 The Classification of Forex Trends
3 Determining the Direction of a forex Trend
3.1 Why do Support and Resistance lines change their role?
3.2 Traditional Method: Higher Highs and Lower Lows
3.3 Using an MA Price Crossover Signal
3.4 Using Trendlines and Channels
3.5 Using the ADX Indicator
4 Determining the Strength of a Forex Trend
4.1 1) Failing to Make New HHs and LLs (Higher Highs and Lower Lows)
4.2 2) Time Between Trendline Retests
5 Summary

About forex trend trading,you’ve probably already heard the expression “the trend is your friend.” This phrase is especially true in the forex market, as currency pairs have a great tendency to trend. This is why one of the most important goals for forex traders is to be able to identify trends, the stage of the trend and its strength. The real profits come when you succeed to enter a trade in the direction of a newly established trend, and ride it until it loses steam and reverses.

In fact, all tools that technical traders use have the primary objective to identify and measure trends. Those tools include support and resistance lines, chart patterns, trendlines and so on. In this article, we’ll show you how to analyze forex trends with loads of charts.

The Stages of a Forex Trend

Among all the major financial market, the forex market has the largest tendency to move in trends. A trend in that definition would be simply the direction in which the market moves. However, prices move not solely in one direction, but are characterized by smaller movements from time to time that go against the main trend. These movements are called the corrections, and are part of the overall long-term trend.

That being said, markets can move up, down, and sideways. An uptrend forms when each new peak forms a higher high compared to the previous high, and each new through forms a higher low compared the previous low. Similarly, a downtrend is defined by successive lower lows and lower highs. A sideways market, as its name suggests, tends to be range-bound without forming new higher highs and lower lows. It’s estimated that more than a third of the time, markets move in a sideways fashion, making it important to identify such market conditions.

The Classification of Forex Trends

Trends can not only be classified by their direction (upward, downward or sideways), but also by the period of time that they are intact. In this regard, trades are classified as long-term (major) trends, intermediate trends and short-term trends. Major trends last longer than a year, intermediate trends are usually corrections of the major trend at last from a few weeks to a few months, while short-term trends last for a few weeks and shorter. It’s important to note that trends can last anything from a few minutes to decades, but technical traders usually group them into the three mentioned categories.

As the Elliot Wave theory states, each shorter trend is part of the larger trend, and there can be many short-term deviations from the major trend, but all will eventually move back in the direction of the main trend. Currencies tend to form zigzag patterns, which are essentially shorter trends that consist of even shorter ones, but all will eventually resume in the overall direction of the major trend. The Elliot Wave theory also states that trends consist of 5 impulsive waves, followed by an ABC-like correction made of 3 steps.

Determining the Direction of a forex Trend

It’s important to grasp the general market sentiment and trading psychology behind support and resistance lines(actually the support and resistance line is a psychological area,where the price be approved by almost all of traders, most time is a area,not a line), in order to successfully trade forex trends. When a new uptrend trend is about to start, the first signal it generates would be a fresh higher high. In this situation, we have three active market participants: the buyers, the sellers, and the traders who decide to stand aside. With the fresh high, buyers are confident that a new uptrend has started, while sellers start to doubt their initial short positions and decide to go long after the price gets lower again. The same happens to traders who stand aside and have no open positions.

Eventually, the price retraces to the previous swing high, which has now become a support area with former sellers switching their short positions for longs, buyers adding to their existing long positions, and the undecisive traders entering the market with buy orders as well. The price starts to push higher, making a fresh higher high, and a new uptrend has formed. Downward trends form in a similar, but opposite fashion.

Now, let’s see how you can determine if a trend has started, and which direction is it going to take.

You’ve already learned that trends consist of peaks and throughs, which can be identified on the chart either as higher highs in case of an uptrend, or lower lows in case of a downtrend. If the price succeeds to form a new higher high, ultimately breaking the prior peak’s resistance line, it’s an indication that buyers still control the situation.

Similarly, by creating lower lows and breaking support lines of previous throughs, the market is classified as a downward trending market.

This concept is easily explained by the following charts: 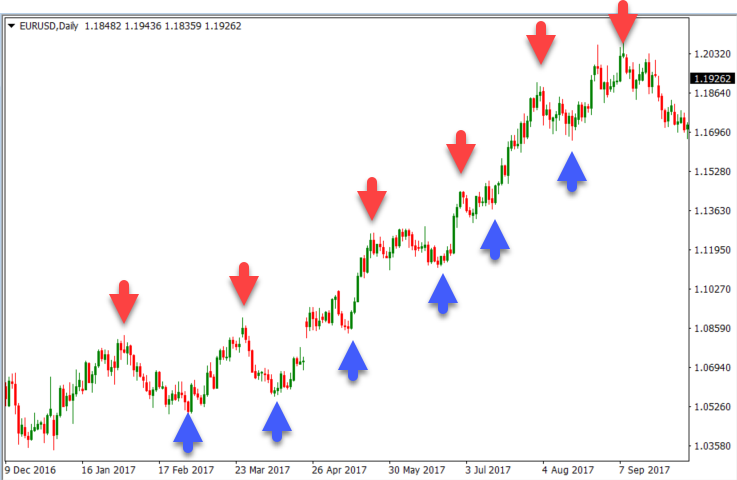 The chart above shows an uptrend forming successive higher highs (red arrows) and higher lows (blue arrows). This is a clear indication that an uptrend is active. 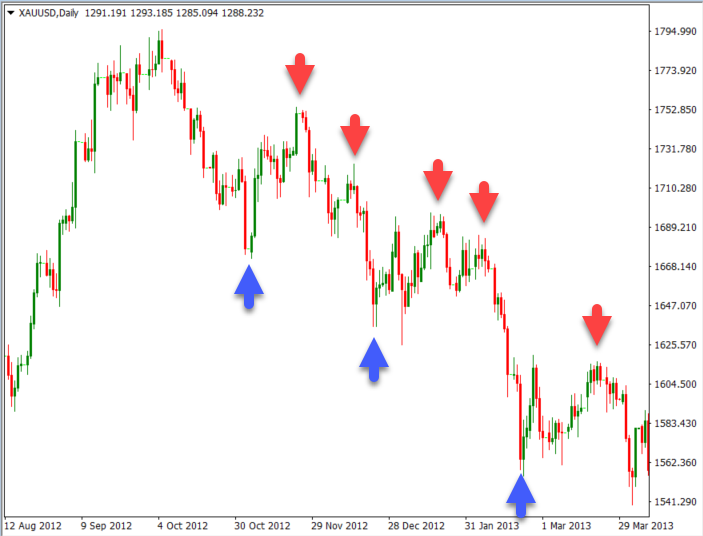 This chart on the other hand, shows how a downtrend looks like. The price makes successive lower lows (blue arrows) and lower highs (red arrows), signaling that a downtrend in under way

The MA price crossover signal is not just used to identify upward and downward trends, but can be utilized as a simple forex trend trading strategy as well. It’s based on the widely popular moving averages, and its basic premise is that while a price trades above the MA, the trend is considered upwards. Similarly, while the price trades below the MA, the trend is considered downwards. The point where the price crosses the MA from below or above, is also considered as an early buy and sell signal, respectively.

It’s recommended to use an exponential moving average (EMA), as it reacts faster to fresh price action, i.e. gives larger weights to the most recent periods, compared to simple moving averages (SMA). Another thing you need to think about is the periods-setting for the EMA. A shorter-term moving average tends to create a higher number of signals, which are unfortunately accompanied by a higher number of fake signals as well. On the other hand, longer-term EMAs create fewer signals, but their success rate is usually higher. This being said, the usual setting for the MA price crossover is between 30-50 periods, but you can adjust to them your trading style accordingly.

The following chart shows how this forex trend trading strategy can be used to identify upward and downward trends. 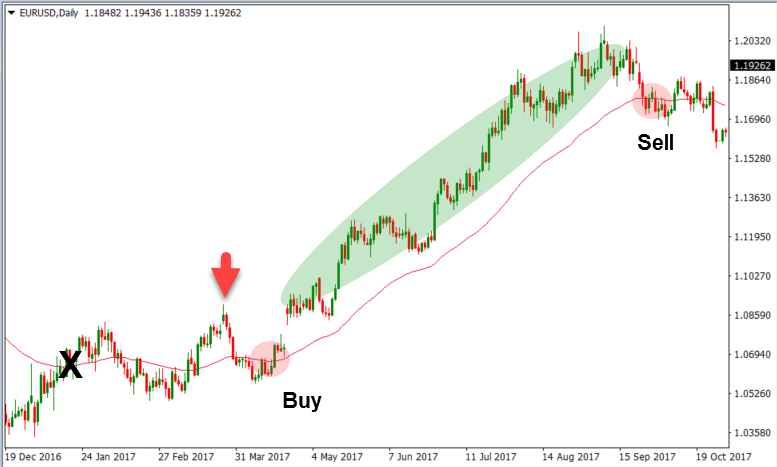 This is the same example we used for the analysis of higher highs. The price stayed above the 50-periods EMA, signaling that the new trend has formed. Notice that we didn’t enter immediately with a long position the first time the price broke above the EMA. The reason for this is that we want another confirming signal that an upward trend has started, and the confirmation came in a form of a fresh higher high (red arrow), after which a buy order was placed.

Trendlines and channels are also a popular and very effective way to identify trend directions, although they best signal a possible trend reversal. A trendline is simple to draw, just connect at least two extreme price points and you project the line into the future. An uptrend has a rising trendline due to its higher highs and higher lows, while a downtrend has a falling trendline due to its lower lows and lower highs.

The following chart shows both a rising and falling trendline, as well as the points where the price breaks the trendlines which is a strong signal that the momentum is about to shift. 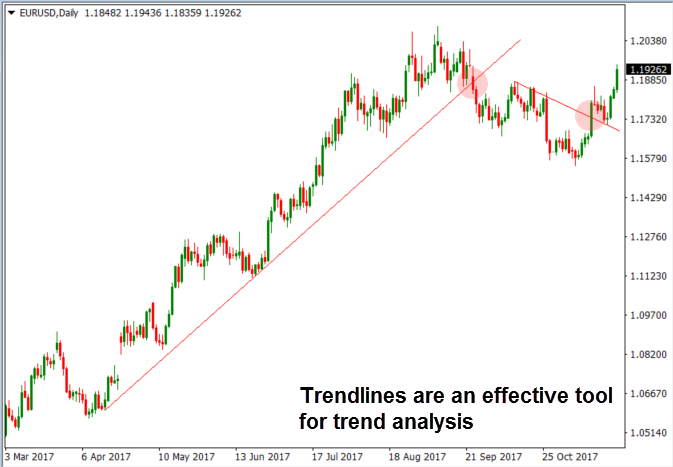 The ADX indicator, or average directional movement index, is a technical indicator used to measure both the direction and strength of a trend. It consists of three lines: the ADX line, the +DI line, and the -DI line. The ADX line is used to determine the strength of a trend, where a higher reading represents a stronger trend. The usual threshold for a market to be classified as trending is an ADX reading of at least 25.

The following chart shows an ADX indicator plotted on our example. The thick green line represents the ADX line, the +DI is red and -DI is blue. Notice how the lines intersect and behave in regard to the price-action. 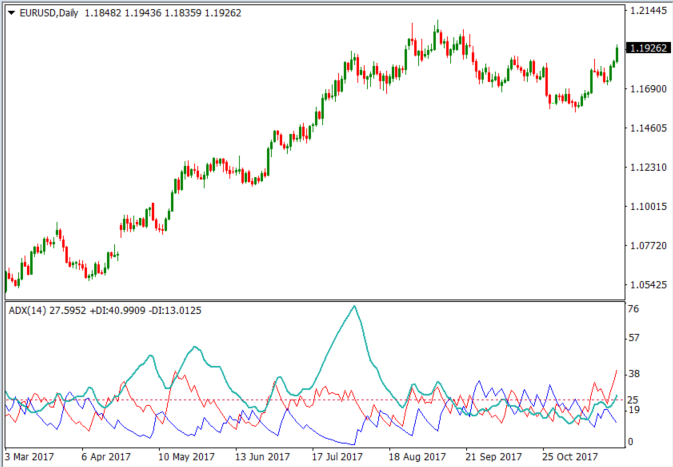 Determining the Strength of a Forex Trend

Identifying a trend in forex and determining its direction is just one side of the coin. Traders are also interested in measuring how strong the trend is. You don’t want to jump on a trade if the trend shows to be unstable, and that a possible reversal might be ahead.

We’ve already covered a few ways to determine the strength of a trend, such as spotting higher highs and lower lows. If the price fails to create a new higher high during an uptrend, or a lower low during a downtrend, the trend is not as strong as it once was.

As you can see from the chart above, the failure to form a new higher low (HL) and subsequently a new higher high (HH), showed that the uptrend is losing its strength. In fact, the price fell significantly after the new lower high (LH). 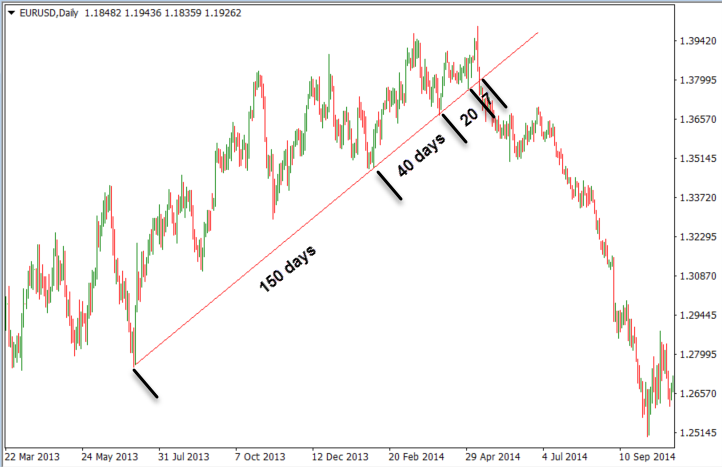 The forex market likes trends, which makes it even more important for forex traders to be able to identify a forex trend, its direction, and to measure the strength of the trend. In fact, many aspects of technical analysis have the primary objective to give answers to those questions, with tools such as trendlines, channels, chart patterns, indicators and so on. Being able to identify a new trend at its beginning has a large payoff, and this article aimed to give you the most important tools to catch exactly that. By utilizing the mentioned tools, you’ll have a significant trading edge over other traders in one of the most rewarding types of trading – trend trading.