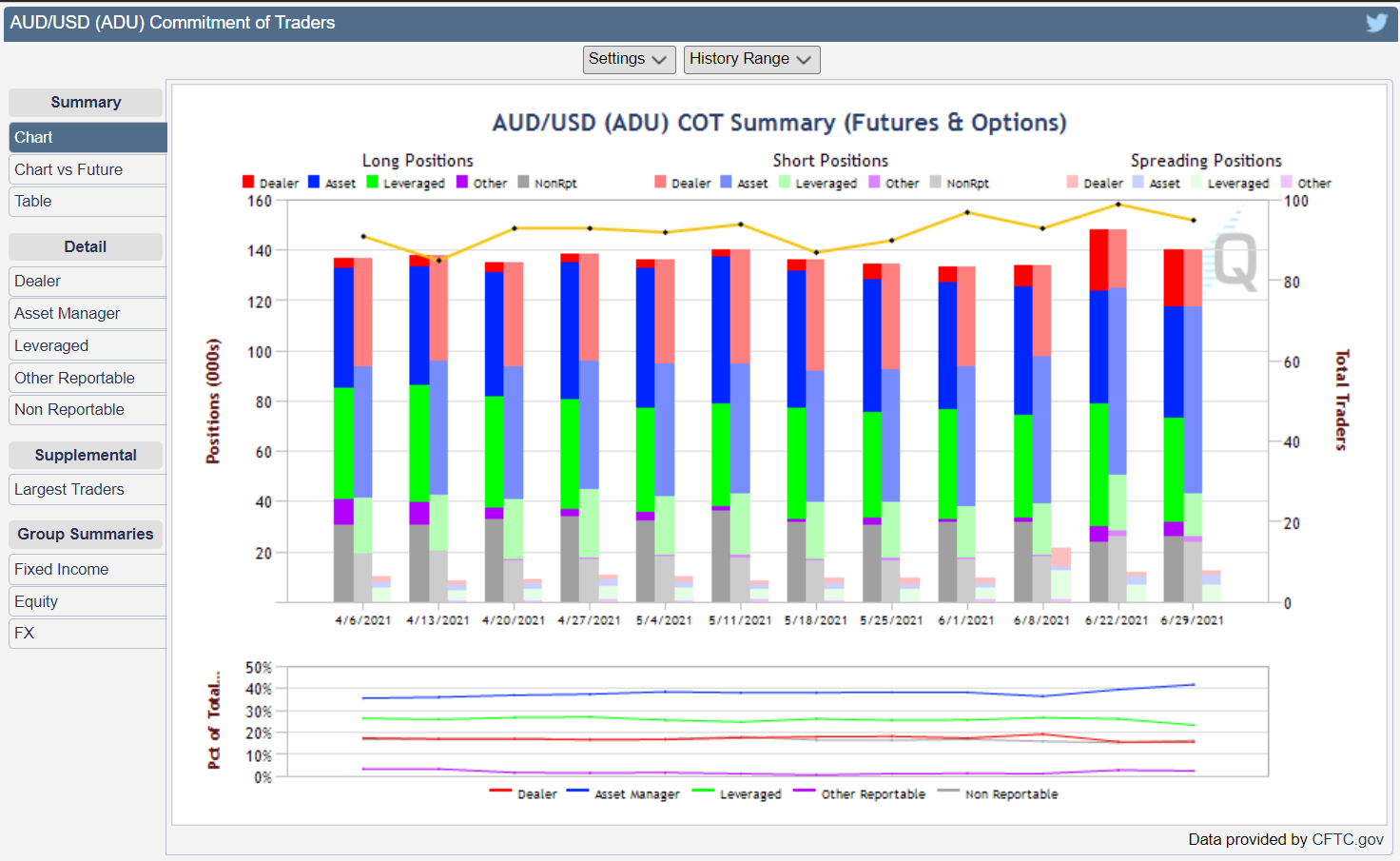 Here’s a complete guide on the CoT report for forex traders, including valuable tips for the different trader categories covered by the report.

What is the CoT Report and Why Should You Care?

The Commitment of Traders report, better known as the CoT report, is a series of reports published by the CFTC (US Commodity and Futures Trading Commission) which reflect the market positions held by different types of market participants in the futures and options markets.

The CoT report is published every Friday at 15:30 Eastern Time and includes all positions and changes in the positions of different market participants up to the prior Tuesday.

As you can see, when the CoT report gets published and hits the newswires on Friday, the changes in positions of the last three trading days aren’t included in the report, which is why many traders believe the CoT report to be lagging and that is doesn’t provide any meaningful insight for trading. However, this can’t be further from the truth.

We must also stress that the CoT report doesn’t include only currency options and futures, but also other markets such as commodities, metals, and agricultural products. However, as forex traders, we’re mostly interested in options and futures contracts of currencies.

The Trader Categories of the CoT Report

The CoT report includes up to 20 types of traders in options and futures who must report their open positions once they cross a minimum threshold of activity. When the CFTC gathers all the data, the numbers get further grouped based on the nature of the business of the trader.

The CoT report includes categories such as large speculators (also known as smart money) and commercial accounts. Large speculators are a group of traders that engage in the market for speculative purposes, to make a profit when the markets go in their favor.

Large speculators consist mostly of hedge funds and banks which engage in the market to make a profit. They are usually trend-followers and base their trades on market fundamentals, which means that they don’t have to frequently change their market views (unless there are some important and unexpected events in the market.)

This is also the reason why the positions of large speculators more or less take the opposite direction of commercial traders.

Dealers don’t participate in the markets for for-profit purposes, just like commercial traders. Instead, they act as liquidity providers for other investors who want to trade with them. This means dealers need to take the opposite direction of investors.

Asset managers are large institutional investors who act slowly in the markets, usually only after a strong and established trend has formed. They include large pension funds, mutual funds, insurance funds, and endowments, to name a few.

Finally, leveraged money includes traders such as registered Commodity Trading Advisors (CTAs) and some types of unregistered funds identified by the CFTC. They are profit-driven and usually follow the direction of large speculators.

Another important indicator of the CoT report is the percentage of open interest vs outstanding positions. When the percentage reaches an extreme level in a particular category of traders, chances are that the trend in the market could reverse. For example, if large speculators increase their number of contracts (open interest) near an extreme level (for example, taking into account the last 12 months), this could mean that the trend in the underlying market has formed a top or bottom and that the price could soon reverse.

Where to Find the CoT Report?

You can find the latest CoT report directly on the CFTC website every Friday of the week, but the report is published as a table, which makes it harder to identify changes in the positions among different categories of traders.

That’s why a large number of websites exist that offer a graphical representation of the CoT report. On those websites, you can clearly see how many longs or shorts are added by large speculators, commercials, asset managers, leveraged money, and dealers.

The website that I prefer is the Chicago Mercantile Exchange (CME). Here is the link to the latest CoT report: https://www.cmegroup.com/tools-information/quikstrike/commitment-of-traders.html#

First of all, you’ll have to select the product you want the CoT to be displayed for. There are different options and futures markets you can choose from, but we are interested in currencies, so select “Foreign Exchange”. Next, select “FX Majors”, and then the currency you are interested in.

Note that all currencies are listed with the US dollar as the counter-currency and that you can’t select the CoT report for the US dollar as the base currency. However, you can find the USD CoT, based on the aggregated value of contracts in other currencies, on some other websites. I still prefer CME because it offers plenty of filters and charts for every other currency except the USD.

Here is the summary chart for the Australian dollar. It includes the positions for all major trader categories which are grouped in two bars. The left bar shows the long positions, and the right bar the short positions for each week (remember, the CoT report is published every Friday).

If you take a closer look, you may have noticed that there is another part of the bar which we haven’t mentioned before, called “spreading”. Spreading simply reflects those traders that have both a long and short position in the currency, such as for hedging purposes, which in turn doesn’t have a direct impact on the total long and short positions.

Trading the CoT Report(HOW TO)

When trading the CoT report, there are a few rules to follow. First, large traders from the categories of Large speculators and leveraged money tend to enter in trend once they’re established and strong.

They are fundamental traders, which means they don’t have to change the market views that often or adjust their market positions. This is why the CoT report provides actionable insights into the forex market even though the report itself is delayed by three days.

In simple terms, when large speculators increase their long positions or decrease their short positions (or both) in a currency, this signals us that the currency could extend its underlying trend.

For example, if large speculators are net bearish on the British pound and increase their short positions in the currency compared to the previous week, this could signal that the British pound could extend its underlying downtrend. This can be seen on the chart above, where large speculators kept adding to their short positions in the GBP, and the price continued to trend downwards.

However, around March 2020, the Covid pandemic led to a significant central bank liquidity response, which in turn increased appetite for riskier assets and put selling pressure on the US dollar. The following uptrend in the GBPUSD pair could have been anticipated by the shift in positioning among large speculators. Notice how large specs added to their long positions as the price continued to trade upwards.

When following the CoT report, to confirm a trade idea, it’s a good practice to follow both commercials and large speculators. If you’re bullish on EUR/USD, for example, take a look at whether large speculators added to their longs (meaning they are bullish as well) and commercials added to their shorts (meaning they are additionally protecting against higher prices in the pair.) This double confirmation can lead to many great trades in the forex market.

Here is another example in EUR/USD. This is a 5-year weekly chart from barchart.com, which offers the CoT report overlaid with the actual price-chart of the currency pair. Since I am using another platform for charting, I follow the CoT report from the CME website, but you may also use barchart.com to learn how the price behaved with changes in the CoT report. It’s totally free.

In between, from 2018 to 2020, EURUSD was in a strong downtrend, and large speculators became net sellers of futures and options on EUR (remember, the CoT report reflects positions in the options and futures markets.)

Here is another example from the TIFF report. The TIFF version of the CoT report includes asset managers, dealers, and leveraged money. As mentioned earlier, asset managers consist mostly of large pension and insurance funds, which are slow players in the market. They engage in very long-term trends in the market, so we are not that much interested in their positions. Leveraged money usually takes the same direction as large speculators, and dealers usually take the direction of commercials.

However, since the clients of dealers are often knowledgeable investors, they can provide valuable clues about the future direction of the market. The chart above shows how dealers behaved when EUR/USD entered into a ranging market.

As investors adopted a short bias in the currency pair, dealers had to hedge those short positions by increasing the longs in their portfolios. This was an important signal that the EUR/USD pair is about to collapse, which happened shortly afterward.

The Commitment of Traders report is released every Friday at 15:30 Eastern Time by the CFTC and covers changes in positions of large market participants up to the prior Tuesday.

Even though the report itself doesn’t cover the three days from Tuesday to Friday upon release, it’s still a very useful report as large traders don’t have to change their market views very often.

By following the changes in positions from the previous week, traders can get extremely powerful signals on the future direction of currencies in both the short and long term.